Gold bugs and bitcoin enthusiasts agree on a number of issues including the expected continuous decline in the value of fiat currencies. Historically, both Bitcoin and gold have appreciated in value. Gold has performed favorably against other currencies since the rise of the Roman Empire. Albeit, over a shorter period, Bitcoin has generally increased in value since its invention in 2009 by Satoshi Nakamoto. However, differing arguments surface when it comes to predicting which asset will dominate in the future when fiat currencies collapse. While gold bugs expect gold to continue to play the role of sound money, proponents of bitcoin view the bitcoin network as the best technology for a free global monetary system.

In order to reach a verdict, a comparison of gold and bitcoin in terms of portability, fungibility, divisibility, and ‘replicability’ is necessary. The difficulty with which new units are created and the control users have over their assets are also key. The asset that performs best in these areas is more more likely to become the preferred and dominant form of money in the future.

Fungibility refers to the ability of an asset to be interchanged with another individual asset of the same type. Such assets are therefore identical and can be mutually substituted. One ounce of gold is no more or less desirable or valuable than any other ounce of gold. It, therefore, does not matter which ounce of gold one receives in payment for a service. Bitcoin, on the other hand, is not perfectly fungible — yet. The traceability of bitcoin transactions has made it possible for bitcoins used in illegal transactions to be differentiated. Such coins are less desirable and are sometimes refused. Important improvements in privacy will tackle this issue and will likely see Bitcoin’s fungibility improve over time.

Bitcoin’s non-physical nature means it can be easily transferred to any part of the world provided there is internet access. Additionally, Blockstreams’s network of satellites and goTenna’s mesh network have made offline bitcoin transactions a possibility. Gold, on the other hand, is not easily transferred or transported. Moving large amounts of gold across the globe comes with logistics and security-related challenges as well as insurance costs.

It is worth pointing out that gold can also be digitally transferred worldwide through third-party services. This, however, brings up the issue of censorship. Any entity with power over the said third party will be able to freeze a user’s account.

Both bitcoin and gold are censorship resistant so far as users do not entrust them in the care of a third party. Users of both bitcoin and gold can transact freely and maintain full control over their assets without fear of confiscation. Once again, the difficulty with which large amounts of gold can be safely kept is worth mentioning. Conversely, any amount of bitcoin can be safely kept with inexpensive and basic security measures like hardware wallets and avoidance of private key exposure.

Bitcoin also has an edge over gold when it comes to divisibility. The cryptocurrency is divisible to eight decimal places and is well suited for small transactions as a result. It is true that most users are not accustomed to transacting with amounts with several decimal places but most bitcoin wallets display the dollar value of bitcoins. Standardized coins made from pure gold will not be useful for small transactions since they are of high value. There is also the problem of differentiating alloyed and fake gold coins from pure gold coins.

As mentioned above, other metals can be passed on as gold to unsuspecting buyers or merchants. Bitcoin transactions are, however, secure and difficult to fake. This is due to the fact that the protocol allows users to use a historical list of transactions to detect potential invalid transactions.

Gold has been effectively used as a means of storing wealth over centuries. While all fiat currencies have gradually lost some of their value over the years, the price of goods in gold has remained relatively similar. Bitcoin, a newer asset, has been touted as another good means of storing wealth due to its deflationary nature. However, critics cite its short-term price volatility as a reason why it is not suitable for use as a store of value. For instance, it makes little sense for a citizen of a country in economic crisis to store wealth in bitcoin at a time the bitcoin price is plummeting faster than the local currency in question. Proponents of bitcoin in turn point to the volatility of gold when it was still a new investment vehicle. The point here is that bitcoin will eventually become more stable as it grows as an asset.

The difficulty and costs involved with mining new units of gold contribute to its effectiveness as a store of value. The expensive nature of the gold mining business simply limits the supply of gold and thus makes it scarce enough to remain valuable. The bitcoin mining business has also become more capital-intensive over the years. More importantly, there is a 21 million cap on the total number of bitcoins that will ever in existence. This means there is a certainty that there will be no new units of bitcoin mined after the cap is reached. Same cannot be said of gold as there is the slim possibility of new knowledge and technology making the creation of gold in laboratories a cheaper process.

On the whole, the two assets are sound forms of money that are likely to remain in use in the future. Both bitcoin and gold are good stores of value that are not easy to create. While gold enjoys more public confidence as a result of being in existence for centuries, Bitcoin has an edge when it comes to ease of transfer, divisibility. The cryptocurrency is also more difficult to fake and has a more finite supply. All things being equal these advantages should make bitcoin more dominant in the future.

Wes was exposed to Bitcoin in 2012 and fascinated by the possibilities of this new technology.

Enjoys participating in public technical discussions focused on the issues and possibilities of Bitcoin and CryptoCurrencies.

CRYPTOFISH facilitates the purchase of CryptoCurrencies worldwide through our online and mobile interface specifically designed to take the complexity out of the process.

***This article was initially published on Medium. 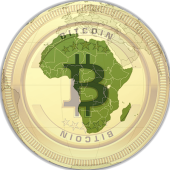 Can Africa Explore Benefits of Autonomous Governance For Development?

Bitcoin Critic Peter Schiff does not Relent, Despite being Proven Wrong Time and Again

Blockchain To Tackle Counterfeit Drugs In Africa: The Ugandan Use Case