Blockchain Personality Of The Week: Eric Annan, Co-founder Of KuBitX

This week, the spotlight fell on Eric Annan, Co-founder and CEO of KuBitX as the QBITtimes’ Blockchain Personality of the Week. As a Pan-Africanist, who believes Africans are the only people who can solve Africa’s problems, he sees the Blockchain as the way out of the continent’s quagmire.

One of the most worrying factors amongst some industry players in the Blockchain space in Africa is that if Africans don’t wake up, foreign companies will use Blockchain to ‘enslave’ the continent again. This stance emanates from the fact that most top Blockchain companies operating in the region are not African.

However, it is invigorating to see people like Annan building one of the top Blockchain companies in Africa. He is among the current crop of business leaders in the Blockchain space in Africa, who are spearheading the renaissance of the so-called dark continent.

The KuBitX CEO shared his journey so far in the Decentralised Economy, his vision for Africa and how to achieve mainstream adoption. African needs more Annans!

QBITtimes (QT): Could you share with our readers your background?

Eric Anann (EA): I am a Ghanaian by birth, an African by right, schooled in Ghana, worked in Ghana and started my entrepreneurial journey in Ghana with a company I co-founded with two other friends called Major Capital but now defunct. My real business journey started in Nigeria when I travelled with a university colleague and boss at the time of my student activism days as a student leader.

This gentleman is Jeremiah Salifu, who was the President of the Private University Student Association of Ghana (PUSAG), and I was National Financial Controller. He advised me after I introduced him to an online company which used to operate VOIP services using a direct sales approach. My life and worldview changed when I entered Nigeria through Abuja in July 2015.

The people I met, the kind of energy and positive ambience in Nigeria indeed was overwhelming. Today I have successfully co-founded an amazing business built on impact with smart Pan Africans spread in about six countries with a Nigerian and Angolan as Cofounders with over eight other founding team members.

QT: How did you get into Blockchain and Cryptocurrencies?

EA: I was introduced to Blockchain space in 2016 by a gentleman I met during my first business in Abuja. This gentleman called me one afternoon saying that he wanted to see me, I agreed to meet him, and he came with a lady called Njideka Adaego who did the presentation and remains a big sister to me.

It was Onecoin which at a time was a popular flagship campaign that got me into this space; it was so exciting as one didn’t know much about Blockchain. I think a lot of Nigerian today got to know about Blockchain through one scheme or the other.

I must admit that it gave me the opportunity to learn very fast by spending my time on the Internet to follow the news and personalities that had more knowledge in the Blockchain space. I read a couple of books like “The Rise and Fall of Digital Currency-The 7th Disruption” by Thomas McMurrain, travelled for international conferences in Dubai, Kenya, South Africa, Macau etc. Fast forward, I have evolved and built two companies digitalkudi.com where we used to buy and sell digital assets, the top 10 and now co-founded KuBitX.

QT: What are some of the Blockchain/Cryptocurrency projects you are involved?

EA: I invested so much in different ICOs most passed as scams, most notable ones BitConnect, Chromium, Hextracoin, Davor, some very successful like Lockchain (LocTrip), Aeron, XLM, Tezos, Ripple, EOS etc.

“Now I have become a player in the space building KuBitX with equally selfless individuals who see Blockchain as a tool we can use in Africa to solve gaps in our financial payment and access by making it simple for the market woman in Ariaria market in Lagos, the cattle rearer in Botswana, the Copper miner in Zambia, the teacher in Nairobi or the Student in Kampala, the cocoa farmer in Ghana, the fisherman in Sierra Leone not forgetting the banker in Harare.” 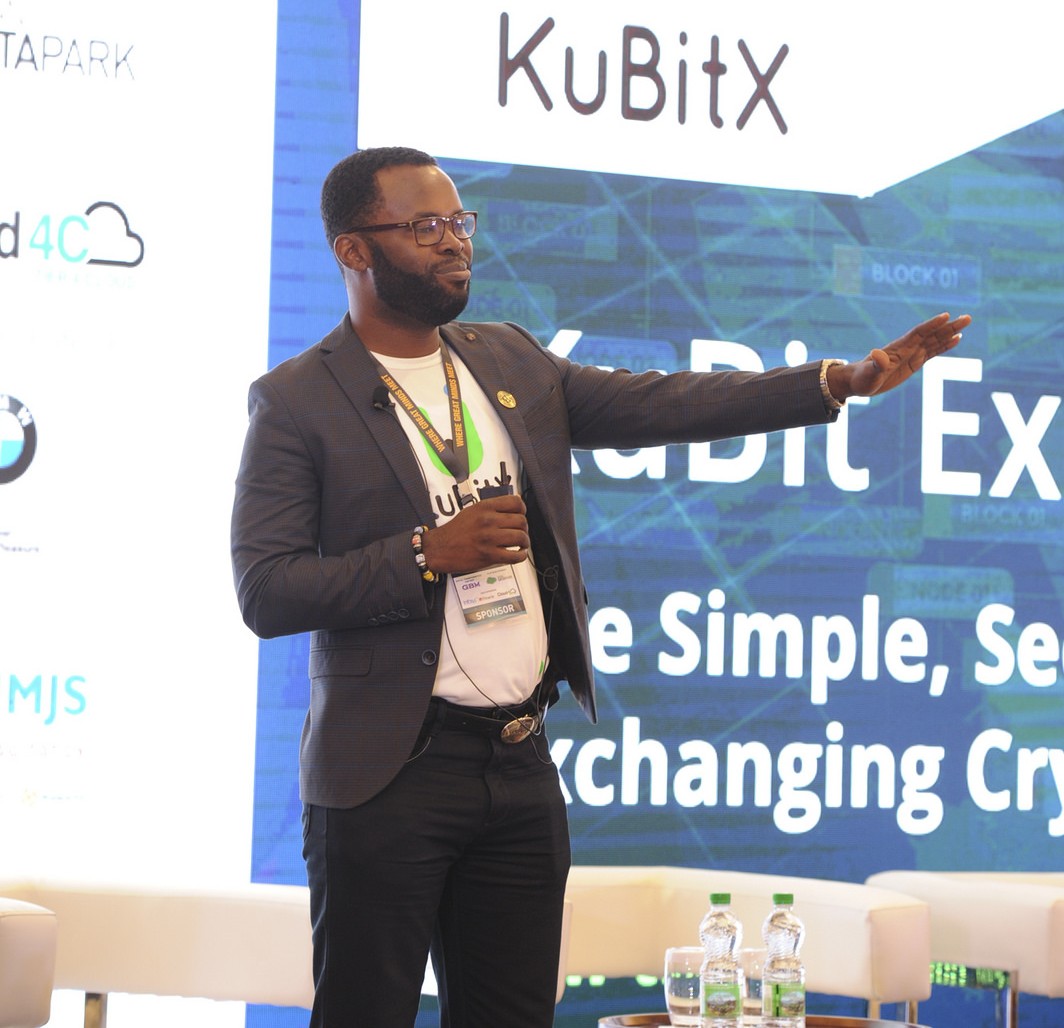 QT: As someone who has built a Blockchain company in Africa, what are the significant challenges in the African landscape?

EA: The first significant hurdle is the culture of non-participation of Africans in the early stages of innovation. To be specific, there are about six growth stages of innovations namely, innovators, early adopters, early majority, late majority and the laggards, Sadly, Africans almost always play the laggard role where we are just mere consumers.

Secondly, the support mechanisms from the private sector, government policies and also community engagement is thin. It’s easier for Africans to accept anything foreign than embracing their own business built by one of their own.

“Again, there is so much emphasis on competition, or I’m better than him than collaboration. There is this thing that, if he can do it, I can do it better than him, so we end up building and occupying space in silos than making any significant impact that will outlive founders and generations.”

For me, this was a challenge, but I figured out that it can actually be a tool to redefine the narrative. With an understanding of abundance, where we can bring diversity on the table, where all are given voices without fear of judgement to achieve inclusion that is not attached to any connection is everything we have achieved in KuBitX. Yet to accomplish are premised on fruitful collaboration, i.e. 0.1% of a billion is far more dignified than 100% of empty noise with zero impact on humanity.

QT: From your standpoint, what stands in the way of mainstream adoption of Blockchain Technologies?

EA: I think a lot of Crypto enthusiasts and the Blockchain technology community believe that this technology is an overnight solution to all the gaps in our existing legacy systems that have earned the trust of society for a very long time. But, I have a very different perspective on the euphoria by most of the players.

“First of all, Blockchain can’t eliminate the current systems overnight even though it holds incredible potential. What we need to do, if we are interested in overhauling the current system that Satoshi through the white paper sort to solve, then we should be thinking about how to collaborate with the existing systems and walk them through.”

Be it government or private sector on the essential benefits of adopting Blockchain in parallel with what they have now and see how it enables them to reduce friction, inefficiencies, increase revenue and above all provide enhanced security for the entire economic spectrum. I believe we can have an overwhelming mass adoption with ease just as we saw the transitional period from analogue finance to plastic money, electronic money that metamorphosed into digital finance today-with increasing fintech solutions.

So as a believer of the future of decentralised finance, the way to achieve inclusion and mass adoption, is by a fruitful collaboration and synergy.

QT: How do you see Blockchain/Crypto solving obstacles and making the world a better place, especially in developing regions like Africa?

EA: for me, I see Blockchain as one of the new disruptive tech stacks to help Africans leapfrog. From finance, governance, procurement, elections, the rule of law, land registry, identity management, data etc.this is where we should head.

“We don’t need 120 years to get to where America or Western Europe is today or even most Asian countries. However, if we are tact, committed, and with a shift in mindset that genuinely want to build an Africa where the son of nobody without access to power can rise through hard work, competence, blood and sweat and create wealth, then I think this is something that must occupy policy, strategy and planning for the next five decades to solve problems in Africa.”

QT: Let’s say you fall asleep and wake up in 50 years, what question would you ask first about Blockchain/Crypto?

EA: How did Blockchain eventually save Africa’s economy?

QT: Tell us your most Provocative/controversial thought in Crypto/Blockchain?

EA: Well, my most radical statement I have made is that nobody will solve Africa’s problems, but everyone comes to Africa to milk, so Africans need to be the one to truly build Africa by leveraging Blockchain.

QT: Which Blockchain/Crypto project is your favourite, apart from KBX?

EA: KBX is the native token of KuBitX which is traded on the stellar dex and KBX wallet and exchange. Well, apart from KuBitX, I think the most interesting one is Stellar protocol, even though I have some reservations about their governance. I don’t know whether it is by design or unintentional to leave projects that build massive solutions on the network to struggle with no support.

But it’s an excellent rail especially for micropayments and tokenisation of assets like Stablecoins. There is another rail built by a Pan African fintech company called Interstellar which has developed blockchain solutions that will reduce the cost of financial transactions and help address the problem of financial inclusion for the unbanked and the underbanked.

Frisco d'Anconia is a journalist by profession and a Free Market Policy analyst. Through Africa Youth Peace Call which he founded in 1997, more than 2000 African youth were educated in Free Markets Economics and entrepreneurship. Many of these people have moved on to start businesses and institutions to advocate for market reforms in Africa. In 2007, he won the 1st Prize of the Mont Pelerin Society Essay Competition for Africans under 30 with an essay on Ghana's Telecommunication Liberalization. This man single-handedly brought Bitcoin/Cryptocurrency and Libertarianism to his native Ghana. Since 2011, he has been spreading Blockchain technologies in Ghana through his Liberty and Entrepreneurship Camps. He has written for the Cointelegraph, CryptoCoinsNews, Core Media, Bitcoinchaser and others with the pen name Frisco d'Anconia. From 2016, he is travelling through Africa promoting and writing about Blockchain technologies and its communities for the Crypto journals. So far the Cryptotraveler/Cryptovagabond as he's popularly known has been to 22 African Countries attending conferences, organising Meet-ups and promoting Blockchain Projects. He lives on, and solely earns Crypto and has no bank account. He ardently holds that Blockchain technologies are the answer to Africa's copious malaise. Currently, Mauritius is his base where he runs Qubitica LTD, a Blockchain Company as CEO, and as the Managing Editor of QBITtimes. His interests are Economic Freedom in the world, Fintech, writing, teaching, travelling and children, and has two beautiful daughters.

Binance And Others Must Learn From Hack, Make Their Systems More Resilient